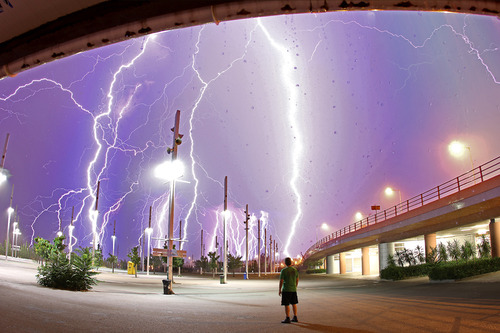 Lightning Over Athens. [via]

42 “stacked shots” taken during a lighting storm. I looked up the term “stacked shots”. It’s like it sounds, a process of superimposing multiple images.

“Stacking was developed for astronomy. The purpose then was to reduce digital noise. When using film, astronomers would sometimes expose for hours at a time (occasionally, exposing the same piece of film several nights in a row, making the exposure equivalent to several days).

Trying to do the same with digital would result in 100% noise, 0% image.

By stacking many images of shorter duration, [digital photographers] can get the equivalent of a very long exposure, each of which has the noise of a shorter exposure. The signals combine in a complementary fashion, while the noise combines in ways that mostly cancels itself out. There are more advanced statistical techniques uszed that can reduce random sensor noise to virtually zero.” —AustinMN @ Panoramio