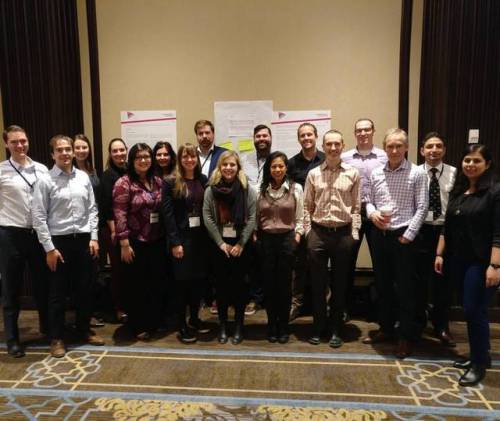 Andrew Burton and I spent the morning talking Open Data and Open Government with these passionate public servants at Canada Beyond 150’s three day conference in Winnipeg.

“Canada Beyond 150 is a ten-month professional development program involving a Canada-wide group of early-career public servants. The project is designed to support leadership and skills development, and to drive a culture shift across the federal public service.”

As part of this program, teams of public servants are working together to explore policy challenges including: reconciliation, open and transparent government, sustainable development, feminist government, and socio-economic inclusion.

Andrew and I meet with the open and transparent government team. Andrew was there in his capacity as the City of Winnipeg Open Data manager. I was there as executive directory of Open Democracy Manitoba.

We discussed the evolution (and/or disappearance) of privacy, the implications of a shift to digital government services, proactive vs reactive public disclosure, IT procurement, open source goverance, fake new, policy making as a participatory act, algorithmic biases, the logistics of open data, citizen engagement, artificial intelligence, techno-privilege, trust and reputation online, and so much more.

I was honoured to be invited to share my experiences and perspectives on these topics. It was inspiring morning. I look forward to seeing what kinds of improvements and innovations these folks will help bring to our federal public service.

Oh, and in case you’re curious, here’s why they chose Winnipeg as the location for their mid-project conference.

I love that space where coding and philosophy collide.

Rich Hickey talked about types, such as Java classes and Haskell ADTs, as concretions, not abstractions.

People often talk about a Person class representing a person. But it doesn’t. It represents information about a person.

A Person type, with certain fields of given types, is a concrete choice about what information you want to keep out of all of the possible choices of what information to track about a person.

An abstraction would ignore the particulars and let you store any information about a person.

From the same piece, how Clojure was designed to make a certain kind of software easier to write.

A type of software characterized as:

solving a real-world problem
=> must use non-elegant models

running all the time
=> must deal with state and time

interacting with the world
=> must have effects and be affected

everything is changing
=> must change in ways you can’t predict 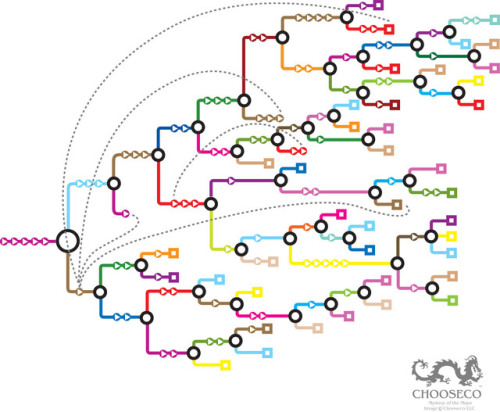 Maps of the forking paths of “Choose Your Own Adventure” books.

My talk about Alan Turing’s 1936 paper on computable numbers. Recorded in May of 2016 at Skullspace for Papers We Love Winnipeg.

The slides for the talk are also available.

I’ll be speaking at Papers We Love again this year on May 24th. This year’s paper will be Christoph Adami’s What is Information?

This presentation will carefully introduce the concepts of entropy and information, explaining them intuitively while still rigorously defined. The presented paper argues that a proper understanding of information in terms of prediction is key to a number of disciplines beyond engineering, such as physics and biology.

Reading and Listening in 2016

If we also count the books I’ve read to my girls before bed, the number would larger. This was the first year I started reading chapter books with the girls. We finished four chapter books together.

As in 2015, I listened to a large number of podcasts, but I took a break from audio books and audio lectures.

Read in that order. No incompletes or duds this year.

It’s my usual mix of science fiction (How to live…, Seveneves, Embassytown, Children of Dune), fantasy (Harry Potter, The Wise Man’s Fear) and historical fiction (Q, Golden Mean), with a dash of “coming of age” (The Cat’s Table). Purity and A Thousand Splendid Suns sit outside my wheelhouse and I thank my sister for those. I found ten of the thirteen novels at Value Village. Still rocking the serendipity-driven reading plan.

Read with the girls:

Oh boy! Can I pick more than three? No?

Summarized in a quote and a poem:

“Learn this now and learn this well, my daughter: Like a compass needle that points north, a man’s accusing finger always finds a woman.”
- Khaled Hosseini

“Every street of Kabul is enthralling to the eye
Through the bazaars, caravans of Egypt pass
One could not count the moons that shimmer on her roofs
And the thousand splendid suns that hide behind her walls”
- 17th-century Iranian poet Saib Tabriz

Children of Dune by Frank Herbert

“The malady of indifference is what destroys many things. Yes, even civilizations die of it. It’s as though that were the price demanded for achieving new levels of complexity or consciousness.”

Where there is energy there is struggle. Abandon certainty! That’s life’s deepest command. The only order is the order we create ourselves. Fear is still the mind killer. :)

I first attempted to read the Annotated Turing in 2013. In 2016 I forced myself to persevere by promising to give a “Papers we Love” talk on Alan Turing’s 1936 paper on computable numbers. Charles Petzold’s book is an heavily annotated version of Turing’s paper. I enjoyed the process of reading the book, grokking Turing’s Universal Machines, and giving the talk. I also got to reconnect with my year 2000 engineering thesis advisor, Bob McLeod, who attended the talk and asked some tough questions at the end. The slides for the talk can be seen here.

I discovered podcasts in 2015 and continued to listen to hundreds of hours worth of them in 2016. The podcasts I’ve been listening to, in alphabetical order, split into non-technical and coding categories:

Binge listened to over 150 episodes of the Tim Ferris Show in 2016. Most episodes are long-form (1 to 2 hour) interviews with interesting people. Tim has a knack for making his guest feel comfortable and chatty. I likely could have pick 50+ favourites, but here’s three.

I listened to the 2016 season while on vacation in the Netherlands, Greece and Spain. Made for some heady runs.

Audio Lectures and Audio Book in 2016